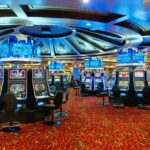 The software company Microgaming has received a lot of attention with the recent release of its much anticipated Playboy slot. The Playboy video slot promises to give players a taste of the coveted Playboy lifestyle “where the finer things in life are not goals, they are rewards”. This 243 ways to win video slot naturally boasts various bonus features and includes hand painted, high definition illustrations of enticing and beautiful women.

The new Playboy slots should not, however, overshadow the recent release of 3 additional Microgaming video slots, namely In It To Win It, Voila! and Carnaval.

In It to Win It is inspired by the extravagant lifestyles of jet-setting individuals who dominate the business world. Symbols on the reels include wads of money, jets, leather briefcases and mansions. In It to Win It includes a Free Games Feature that offers players the chance to significantly augment their winnings. Players need to hit 3 or more businessmen icons to access this bonus feature, in which they are presented with four briefcases containing different prizes and instructed to pick one.

The Free Games Feature concludes with a Double Up feature, where players can double or lose their winnings. The Double Up feature brings to mind the risks involved in major business deals and is thus suited to the theme of In It to Win It.

Apart from In It to Win It and the Playboy slot, Microgaming has also recently launched Voila! and Carnaval. Voila! is a 243 ways to win, French themed video slot and Carnaval is a 5 reel, 9 payline Mardi Gras styled slot game. Both games include various bonus features and are currently available for play at Microgaming casinos.

0 0 0 0
Previous : Choose Online Casinos In Your Region And Win In Your Currency
Next : Free Poker Games Online – Factors To Consider For Total Experience